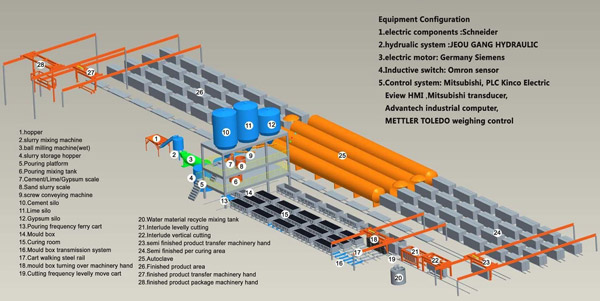 The AAC Plant is designed to manufacture aerated concrete blocks used as building material, which is able to make extreme light weight and large variety of sizes blocks and has excellent thermal insulation nature. Our AAC Plant has the high rate of production capacity in a year.

ZBG's computerized dosing and mixing plant produces slurry finally and slurry is poured into a mould. The slurry in the mould rises and stiffens to build a cake with millions of tiny pores. Aluminum powder will be measured by manual, and added into aluminum mixer to be prepared to suspend the liquid one by one for each mould.The finished suspending liquid can be directly added into the casting mixer. The slurry temperature should arrive at the required process temperature before coasting. And mould will be moved to the bottom of the casting mixer by ferry car. 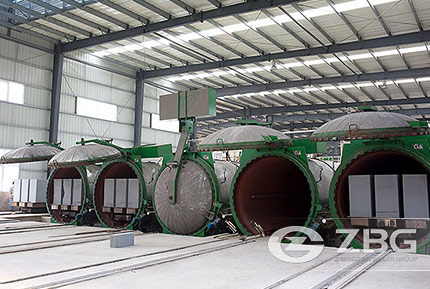 The green block after grouping will be moved into the autoclave by windlass for curing. After curing, the product will be pulled out of autoclave, and be sent to the store yard.

After unloading and sorting, the packing system immediately handles the whole range of AAC products. The capacity of ZBG's production plants usually ranges from 150 to 2000 m'/day (5.000 to 70.000 ft'/ day).

Get An Instant Quotation

For all inquiries, please fill in the form below (* are required) to send us a brief message, and we will get back to you as soon as possible.